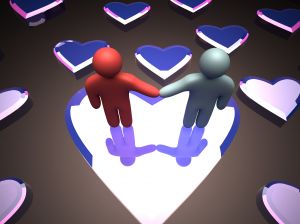 Thulasi was flying high in the sky. Her heart was filled with joy. She was eagerly counting the days for her marriage. Every day, Dinakaran and Thulasi spent more than couple of hours chatting in the phone. They spoke about nothing important but still both of them liked to talk to each other.

Seetha visited Thulasi’s house very frequently to meet her soon to-be daughter in law. During her every visit, she bought a gift for Thulasi and that made Thulasi very uncomfortable.

“Please Seetha amma, I don’t need this type of costly gifts…” she told Seetha after receiving a sparkling diamond necklace from the elder.

“No Thulasi, you can’t stop me… For the first time my son has given me full freedom to buy something… Of course the only restriction is whatever I buy should be a gift for you” said Seetha with a wink.

“Pch, even if he had said that it’s not mandatory that you should spend like this… If I need something I will surely ask you…”

“Come on Thulasi, if you need something you will ask him and not me…”

“Thulasi it’s time that you stop addressing your mother in law as atthai. It doesn’t sound good when you call her by name” said Saradha who was silently watching the conversation between the other two.

“You don’t know how much I struggled to make her address me as amma instead of madam.”

“Ok, I leave it to you both…” said a smiling Saradha.

“Thank you! And Thulasi, as I said, you only had the final say in this marriage, right?”

“I don’t get the context Seetha amma…”

“You remember, some time back when we both had a conversation about you becoming by daughter in law, I told you that you should be the one who should make the choice and not my son… Now that’s what happened right?

They had already completed the shopping for the marriage and ordered the invitation cards also.

Everything looked perfect. But Thulasi still had one big concern in her heart. It’s about Ranjan. She felt bad that in a way she also used him as a scape-goat… She wanted to apologize to him and was also worried remembering his words few days back in the beach.

She shared her worries with Dinakaran and to her dismay he laughed. But he also promised her that he will convince Ranjan about their marriage.

Meanwhile their invitation cards got printed and Dinakaran asked Saradha’s permission to take Thulasi along with him to invite some of his friends. While Seetha was very strict and was restrictive about the meetings between Thulasi and Dinakaran, Saradha was very lenient and didn’t restrict their meetings.

So, as planned, Dinakaran reached Thulasi’s house on time. Saradha received him cordially.

“You won’t believe me Dinakar! She is getting ready for the past three hours. She has already changed two churidars and three saris… I got fed up and asked her to decide on her dress…”

“Hmmm… That’s interesting aunty… Do you think I can go and meet her in her room?”

“Yes of course! I guess she should be ready by now… She is usually very punctual…” said Saradha with a grin.

Dinakaran reached Thulasi’s room and gently knocked the door. He could hear Thulasi’s voice and hence opened the door. Thulasi was busy selecting bangles from her bangle box.

“Amma, will this bangle suit me in this sari?”

“Hmm… Not only that, anything and everything will look pretty for you Thulasi darling…”

Thulasi was startled to hear Dinlkaran’s voice and turned around and stared at him.

“You can’t come inside my room like this…” said Thulasi trying hard to add anger to her voice.

Dinakaran smiled and went close to her and said.

“Oh really? I got permission from aunty and I also knocked the door… I entered only after you asked me to come in…”

His fingers started drawing in her face.

“Please Dinu, this is not a good idea… Come we will go out…”

“Hmmm… Please Thulasi… We have two more weeks for our marriage and that’s 14 days! Please give me something so that I will stay quiet for the next few days…”

“This is really wrong… Please Dinu, understand! Amma and Kavy are outside…”

“Please Dinu, I will not put any restriction after marriage… It’s only 14 more days… That will go away like 14 seconds…”

“Ok…” said Dinakaran and moved away from her.

“Nothing” said Thulasi with a giggle while Dinakaran gave her an angry stare!

They both visited some of Dinakaran’s friends including Misha and invited them for their marriage. Then they reached another office and Dinakaran parked his car in the parking area.

“You have a surprise here darling! So be prepared… Don’t babble… It’s ok if you keep quiet and just in case if you want to talk also, just support my words, ok?”

“Hmmm… Who are we going to meet here Dinu?”

“Come and see for yourself…” said Dinakaran and locked his car and started walking.

Though Thulasi was curious she also walked along with him quietly. Dinakaran introduced her to his friend Kamal, the CEO of the company and invited him for their marriage. Though Thulasi didn’t show it, she was very curious to know what Dinakaran had in his mind.

But there was no need for her to worry about that for a long time! Very soon they heard a knock in the door and Ranjan entered the room. Thulasi was really shocked! And it was obvious that Ranjan was shocked too!

“Hello Ranjan, sorry to disturb you during your work hours…” said Dinakaran.

“No that’s ok…” said a confused Ranjan staring at Thulasi and Dinakaran.

“Kamal, Ranjan is the real reason behind our marriage. That’s why I asked you to call him to your room… Though I loved Thulasi I never had the heart to accept it till she gave me a shock treatment…  Few days back, just to bring out the truth from me she announced that she is going to marry Ranjan and that’s want induced me to tell her about my love…”

your story really superb, the way you described the things is awesome :) and the characters is simply lovable, (esp seetha amma) i just loved it :) dont give up, keep on writing.... actually am yearning to read your stories ;) wish you all the very best for your future upcomings......
Reply | Reply with quote | Quote
+1 # RE: You & me — Sandhya 2014-09-09 06:38
Thanks Selvi. It feels very good to hear those nice words

The story doesn't look like your first writing. Your characters are pleasing and fantastic narration. Wish you all the best. I love all the stories uploaded on chillzee. Looking forward for more storries. Please write stories in tamil as well.
Reply | Reply with quote | Quote
# RE: You & Me — Sandhya 2014-05-14 21:44
Thank you Annanya. Very nice name :)

Thanks for your encouraging words :)
Reply | Reply with quote | Quote
# RE: You & Me — Anusha Chillzee 2014-05-14 22:44
Sandy tamil typing than problema? Chk with Nands she has a a tool that finds the Tamil spelling mistakes for you

Reply | Reply with quote | Quote
# You & Me — annanya 2014-05-15 19:59
Thanks Ma'am. I am desperately waiting to read your next novel. Please upload it soon. Tamil or English I am pleased to read Novels. There were catchy sentence and terms in your “You & Me” which made me to read the entire story in one day.

Thulasi is so sweet

You are chanceless
Quoting Anon:

As Shanthi says appreciations are always a boost. Thank you very much for your comment.

I am working on "In search of Love" series now and will be updating it on Wednesdays.

Yes that was for Aadhi madam

My next assignment from the queen aka admin (

I will miss Thualsi and Dinakaran :-(